Hey Heyy Heyy, Did you think fo what Technology have given in the year 2016, NO. Don’t worry I have a post for you to tell all the story. Well, we have listed the best technology gadgets and things which have bee popular in this year snapchat has introduced spectacles with video recording facility after the failure of  Google glasses. These cool-looking camera spectacles. Instead of selling them online or in stores, Spectacles are cleverly sold through Snapbot vending machines.

High-end VR headsets like the consumer versions of the Oculus Rift and HTC I’ve got launched.  The Vibe’s hand controllers provide a more natural and intuitive way to “touch” in VR world compared to the Rift’s Xbox One controller (Oculus Touch only launched in December), and its room-scale tracking lets users move in real 3D space, furthering the immersion. 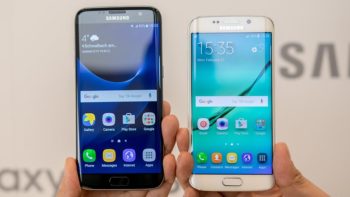 Samsung has introduced Galaxy s7 and s7 edge as an answer for the criticism of Galaxy s6/s6 Edge.The devices are Incredibly beautiful Android devices with blazing performance, long battery life (with wireless charging), class-leading cameras, and useful features like a memory card slot and water resistance.

Read: How to Control Internet Access in Specific Apps on Android?

The latest iPhone  7 and seven plus are the best of all the phones that are released yet.The removal of the headphone jack and new haptic Home button sent shockwaves around the globe. They’re  Apple’s best iPhones with the fastest phone performance on the planet, water resistance (finally!), longer battery life, better cameras (dual cameras for the 7 Plus), stereo speakers and iOS 10.

Read: 8 reasons why android is better than iPhone Google Home is both cheaper and prettier. Powered by the Google Assistant, Home works the same as the Echo: Speak to it, and it’ll control your smart lights, play music through its speaker or tell you the weather. Raed: 5 gadgets Android users should have DJI Mavic Pro is the first DJI’s  foldable drone and one of the world’s first foldable consumer drones in this class — the Mavic Pro simply astounds. In addition to its compact size, the drone also has all of the smarts of the Phantom 4, including obstacle avoidance and subject-tracking, and the 4K video capture is nearly on par as well. Apple’s AirPods are surprisingly powerful as they resemble a pair of EarPods with the wires snipped off. Like Beats’ Solo 3, the AirPods have Apple’s W1 wireless chip for easier pairing and greater battery life (up to 5 hours on a charge). The Echo Dot second-generation is notable for its size and price. The hockey puck-shaped smart home assistant has the same technology that makes the full-size Echo feel like magic. With an Alexa voice command, you can get the weather, play music, get trivia answers, and control your smart home devices, just like with the Echo. The built-in speaker isn’t as powerful or loud as the Echo’s, but you can plug this baby into regular speakers with an audio cable or connect it wirelessly to a Bluetooth speaker. And since it’s only $50, you can get the six-pack for $250 and put one in every room. Hope you loved this article, we think you may also like to know How to recover deleted data for free?